For the love of... global human diversity 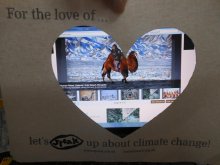 For the love of global human diversity, let's tackle climate change. Here's why:

It’s incredible to think of the diversity of global cultures around the world. It never fails to blow my mind when I watch human planet, read National Geographic, see ‘The Earth From The Air’ images, read articles from global development charities and hear news from my friends’ travels.

Sadly climate change threatens the homes of so many people around the world, and tribal people groups often live on vulnerable and/or marginal lands so many will be among the first to be forced to migrate – losing the lands their culture is tied to.

Think of the people who live in the deserts, forests, Arctic, small islands, savannahs, mountains, and their art, their languages, their way of life, their vital knowledge. Their beautiful, unique cultures are unlikely to survive once their people disperse to cities, other cultures’ lands, and even other countries.

I hate the thought of a future human race that is so homogeneous and culturally impoverished as a result of mass migration because of climate change.

What do you love and want to protect from climate change? Tell the government by taking part in our photo petition!