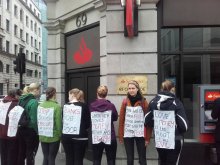 If you didn't manage to make it to our weekender event - you can read all about it here!

We met at 12pm in Bethnal Green and converted our London office space into a cosy chill out hub.  This was so that we could really allow ourselves to feel comfortable whilst dreaming and scheming about our future with SPEAK - with the inspiring words from Ruth Valerio.

New and old faces were sat together bonding over a warm cup of 'communi-TEA' before we were pleasantly transcended into an atmosphere of song lead by SPEAKies - Fish and Helen.  Louise followed up by telling us stories of SPEAK's successes over the last 18 years and shared more information about the weekender events as well as some food for thought regarding new ideas for SPEAK. Ruth arrived shortly after and began by reading a short section from the introduction of her recently released book  'Just Living: Faith and Community in an Age of Consumerism'.  It was magnificent imagery which sparked new thoughts and inspiration in the SPEAK office.  She then went on to talk more about what inspired her writing including her experiences and thoughts about our existance within this consumerist society and how we should try to live effectively for the maintaince of this planet and all of its inhabitants as well as all the challenges that this presents.  Ruth encouraged people to really think about what it is that they are individually passionate about and focus on changing that thing first.  The room felt very inspired and fires were being started in people's bellies to take action.

Following Ruth's talk, we reconnected after a short break to sit down and discuss the future of SPEAK and what everyone's hopes and dreams were for its future - including events for next year.  We took a moment to ask some big questions about aims, expectations and ideas which became a very honest, open and interesting discussion.  In the end, we agreed that we were going to allow SPEAK to go into a chrysalis stage where we can allow everyone to explore what they want from SPEAK and where we can go together and then it will become a magnificant butterfly.

We had a whole day of events happening to celebrate our Break The Code Campaign in East London.  It was really well attended and every single person who performed was fantastic!  You can check out all our photos, videos and comments on the event page HERE! Run on The Banks

This was our first attempt at our Run on The Banks action.  It was essentially a sponsored protest run around the Banking District with prophetic symbolism!  We had a great turn out for such a last minute event idea and it was very informative for the public and the banks.  The concentration of capital in the city of London meant that the run was not as long as your usual marathon... but significant none the less.

At our first stop Santander we burned a £20 note and made a statement by burning our bank statements, after which we read some liturgy, mixed the ash with holy water and marked the sign of the cross on the building.

At the second stop Lloyds we performed and filmed some ode/owed to poems and read out the statements we had attached to ourselves as we were running.

At the old Stock Exchange and the Banking Hall we did a liturgy and reflection in silence of the exchanges taking place and how these pipelines have such an uneven flow. We lifted them God in our hearts asking for a change in flow.

Outside the Bank of England we burned a £50 note, some more bank statements, a liturgy and with some holy water we marked the building with ash.

We ran in-between each banks and got attention with the statements we were wearing and bank statements we were burning.  We are hoping to make this an annual event to raise awareness of money, how it is created and how the system actually works leaving most people in permanent debt.