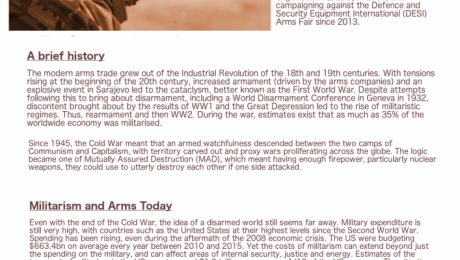 The UK’s record on arms trading is appalling, and its lucrative arms trade come at the cost of political oppression and human rights violations. Britain actively invites countries where child soldiers are used to attending the arms fair right here in London. In 2015 it was revealed that the UK sells to 19 out of 23 countries listed by the UN for using child soldiers – including Congo, Somalia, and Colombia.

In August 2017 we sent out our first digital Pray and Post campaign, in Partnership with CAAT asking people to ask their MP to sign the Early Day Motion (EDM)124.
We teamed up with CAAT who advised us on asking to communicate with our MPs on this Early Day Motion (EDM)124 pushing for Parliamentary Scrutiny of Arms Export control. https://www.parliament.uk/edm/2017-19/124
This EDM called for the re-establishment of the Committees on Arms Export Controls (CAEC), as a matter of urgency, to provide scrutiny over current UK arms sales and the UK's arms export control regime post-Brexit; and notes the considerable public concern about UK arms sales to Saudi Arabia and the use of such arms in the Yemeni civil war.
The Good News is that Committees on Arms Export Controls (CAEC) has now been established! Yes a partial campaign success!

Saudi Arabia continues to lead air-strikes on Yemen, devastating civilian lives. In August, it bombed a school bus, killing dozens of children. UK arms are playing a central role in the bombardment. Now the UN has warned that if the war does not end, 13 million people in Yemen face starvation.The regime has also intensified its crackdown on human rights at home and is yet to account for its role in the murder of journalist Jamal Khashoggi. Saudi Arabia's repression at home and aggression abroad is propped up and supported by UK arms sales. Please ask your MP to take a stand and demand an end to the arms sales.

So now there is a more relevant EDM #1726 to ask your MP to sign asking to End UK arms sales to Saudi Arabia.

If you haven’t written to your MP yet please write and ask your MP to take a stand and sign the latest EDM to press the government to end its trade in arms with Saudi Arabia.

You can use our template letter below to write to your MP through - https://www.writetothem.com

I am writing to you because I am concerned about the subsidisation of the UK arms industry, and how it fuels conflict, aids repression and harms development.

The Defence & Security Organisation (DSO) is a UK government body that exists to help the arms and security industries sell their products around the world. Located within the Department for International Trade (DIT), it is not interested in the human impact of its product: it exists purely to help arms companies sell their weapons. It promotes the sale of weapons to countries in conflict, and which abuse human rights. One of the ways it does this is by helping organise DSEI, Defence and Security Equipment International (DSEI) a bi- annual arms trade fair in London.

Amnesty International has raised concerns about torture equipment being sold here to countries that have concerning human rights records, including Saudi Arabia.

“This is a deeply disappointing outcome which gives a green light to the UK authorities – and potentially Saudi Arabia’s other arms suppliers – to continue authorising arms transfers to the Kingdom despite the clear risk they will be used to commit violations,” said James Lynch, Head of Arms Control and Human Rights at Amnesty International.

I would like to ask you please to sign EDM 1726 to stop the government from its immoral and illegal arms sales to Saudi Arabia
https://edm.parliament.uk/early-day-motion/52198

SPEAK has previously asked for the end of the DESO, the predecessor of the DSO. We would like to ask you to use your influence to ask for an immediate review and end of the DSO department especially with its role in supporting DSEi. Please raise these concerns within the Minister of Defence and Department for International Trade.

Thanks for your consideration of this important issue.

You can also download our Pray and Post Card attachment below and raise your concern by signing and sending it to your MP.

You can read more about our campaign as well as watch videos and hear from our passionate peace warriors here: http://www.speak.org.uk/campaigns/arms-trade

We also encourage you to explore CAAT’s (Campaign Against Arms Trade) website for events you can attend. https://www.caat.org.uk/events

Pray and Protest: Day of action On the arms fair.
It’s that time of the year again when, amongst others, oppressive regimes from around the world descend on London ExCeL for weapons shopping spree - including torture equipment! Once again, London will host the world’s largest arms fair this summer.The biannual DSEI (Defence and Security Equipment International) arms fair is jointly organised by the Ministry of Defence and the private sector, where billions worth of deadliest and most advanced weapons were sold to repressive and oppressive regimes. The international arms trade is big business, and obviously, it is money-spinner for the UK. But at what cost?
The UK’s record on arms trading is appalling, and its lucrative arms trade come at the cost of political oppression and human rights violations. Britain actively invites countries where child soldiers are used to attending the arms fair right here in London. In 2015 it was revealed that the UK sells to 19 out of 23 countries listed by the UN for using child soldiers – including Congo, Somalia, and Colombia.
There is a fundamental conflict between the desire to generate profits from selling arms and the ethical reasons for not selling and promoting weapons capable of inflicting widespread suffering and destruction on innocent victims. And it’s shameful and indeed supremely immoral and hypocritical for a country that prides itself on being a leader in human rights and democracy to then get involved in fuelling war, instability and suffering around the world. The hypocrisy is quite obvious, when as the second biggest arms dealer in the world, Britain sells arms to anyone with sufficient funds including 22 of the 30 countries the British government itself listed as ‘countries of concern’ due to their human rights’ records. It cannot be ignored the fact that these countries do buy arms to be used for internal repression rather than self-defence.
The Government has also ignored calls to stop selling weapons to repressive regimes, including Saudi Arabia, which has been accused by the UN of potentially committing war crimes in its military operation in Yemen, where the Saudis are accused of targeting and killing thousands of civilians including children and destroying vital infrastructures leaving 12 million Yemenis teetering on the edge of famine.
Pray and protest with us at the DSEI’s Arms Trade Fair event at ExCel this September.
It’s going to be business as usual at ExCeL for DSEi this year, and once again it’s time for us to unite in prayer and but also to speak up and let participants of DSEi know that It’s not OK profiteering at the expense of innocent victims. Come join us for a silent vigil with No Faith in War on Tuesday 5th September when a coalition of faith and campaign groups will gather for a day of worship, prayer and non-violent resistance, as arms and arms dealers arrive at the exhibition centre.
Please download our Pray and Post Card attachment below and raise your concern by signing and sending it to your MP.
OR you can email your MP through - https://www.writetothem.com

Much of the brief history is indebted to Alan Storkey, ‘Colin Scott Memorial Lecture: Fighting the War against War’, given on the 11th March 2017 and found here: http://bit.ly/2vezScd